That aside, I spent a couple of days a week with a public relations mob in Logan, but Cinnamon was amply able to keep herself occupied on those days, as that’s what she’s used to her with her pack leaders. 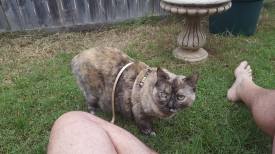 The owners had two weeks off interstate, never checked up on me even once, and I was more than happy to do the back and forth to the far-distant Brisbane airport for their departure and return.

They were well-pleased with my time looking after their tale-less cat, and sent me this lovely reference:

Bill looked after our house in Berrinba, Qld, for two weeks in October 2017 when we went to Tasmania for a holiday.

Bill was wonderful. We had complete confidence in him from the start which meant that we could go on our holiday knowing we didn’t have to worry about anything. We knew that Bill would contact us if he needed anything so there was no need for us to constantly check in on him. We just enjoyed our holiday and it was amazing to be able to simply have fun without having having concerns about our house in the back of our minds all the time.

He looked after our house and our cat. We arrived home to an immaculate house and a happy cat. Our cat is a bit of a special snowflake and Bill ably accommodated her whims and mood swings.

We would not hesitate to recommend Bill to anyone else and we’re already thinking that, next time we’re going to go away, we should plan enough in advance to make sure Bill’s available to house sit again.